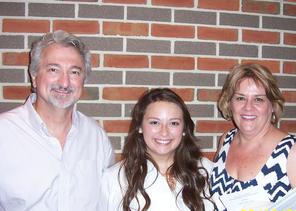 who had just graduated from high school, was

driving home in the middle of the afternoon from the

local YMCA when she was killed by an individual who

was drunk (3 times the legal limit), high on heroin

and driving on a suspended license due to a prior

During the week following her death, we learned more about the DUI crisis throughout Pennsylvania and realized how common DUI deaths were around our state and how inadequate our existing laws were in combating this serious problem.

We subsequently wrote an open letter to our community in the Lancaster Newspaper that stressed the need for our legislators to craft effective laws to address the DUI crisis and further asked that as a first step they support pending legislation associated with the required use of a breathalyzer/ignition interlock after a DUI conviction.  As a result of this letter, the local community responded positively as well as our State Senator and State Representative.  Our State Senator, Lloyd Smucker, took an active interest in this issue and arranged to hold a Senate hearing in Lancaster County on the DUI issue.  The hearing participants included local families who had experienced losses like ours, our County DA, industry experts including MADD and Senate leadership.  From all accounts the hearing was successful in having Senate leadership focus on the issue.

What happened afterwards was both positive and negative.  Senators Rafferty and Smucker moved forward with effort to have the bill passed.  We, MADD and friends reached out to various legislators and news organizations.  Several newspapers and television stations around the state ran stories on the DUI issue and the pending interlock bill.  In October the bill was passed by the Senate, which then moved to the House for its vote.  Even though it was widely believed that the House was going to vote on the bill, the session ended without a floor vote and the bill died.  Needless to say we were disappointed in the outcome but realized that we would need to stay focused on the DUI crisis and not give up.

In the 2015 - 2016 session, Senator Rafferty reintroduced the Interlock/Breathalyzer bill SB290, which was passed and was signed by the Governor in the spring of 2016.  The law will go into effect in late 2017.    There were other bills introduced, however no other bills became law.

Also in February 2016, a group of parents who have lost children to DUI throughout the state formed a group to advocate changes in DUI laws and are moving forward with getting our message to the news media and legislators.   We have named our group PA PAID (Pennsylvania Parents Against Impaired Driving) as our children have paid the ultimate price for inadequate DUI laws in our state.

PAPAID has become active in Harrisburg and around the state and continue to deliver its message on the need to improve DUI laws as too many people continue to die due to DUI.